When I was a kid, the apocryphal! story of the fire at the library of Alexandria, the supposed loss of most human knowledge acquired to that date, was something that made me sad. But in 1994, I became the excited owner of a Microsoft Encarta CD and a Creative Labs CD-ROM drive that plugged in to my PC’s soundcard. Optical disks with 750MB capacity - enough to store a whole encyclopedia, to replace the heaving bookshelves of Brittanica, were a technological marvel. How lucky we are, I’d think to myself, that the sum total of human knowledge is right here in my hand and could never become lost to future humankind. Today, of course, every CD-ROM I ever owned is unusable on modern devices and I understand that there’s much more to human knowledge than fits in 750 MB, but the thought stuck with me. Wouldn’t it be cool to have my own self-contained personal repository of human knowledge, accessible without an internet connection - my very own library of Alexandria? Wikipedia is today’s canonical descendant of Encarta and Brittanica - wouldn’t it be great to be able to carry it around and consult it wherever and whenever I wanted?

After years of kicking this idea around in my head, a chat with friends who apparently wanted it too and a snowy weekend in May provided the catalyst to actually make it happen!

Over the long weekend, I built a thing I have wished existed for years - this is all of Wikipedia, available offline on my @remarkablepaper tablet. pic.twitter.com/mWewIzfOFx

This was a fun thing to build and is an even more fun thing to use, and judging by the response on Twitter, it’s something other people would like too, so here are the instructions on how to build your very own hitchhiker’s guide to the galaxy.

Once all the kit has arrived, you’ll need to format the memory card as ext4, which is most easily done by connecting it to a Linux machine (I used a Raspberry Pi), but is also possible with pain on Mac OS X, seriously, just find a Linux box.

Next, download wikipedia to the memory card. The awesome folks over at the kiwix project maintain an archive of wikipedia pre-compressed into the compact zim file format.

Now we’ll configure the reMarkable. We’re going to install a new launcher called draft by @dixonary_, a zim file server and a little custom UI app I built. We’ll also configure draft to run on start up instead of the built in launcher (called xochitl) and add some incantantions to mount the sdcard and run the zim server.

It is possible to build all the stuff I’m about to recommend from source code, and you’ll find decent tutorials linked from awesome-remarkable – if you don’t trust me not to have modified the contents of the binaries you should definitely do that! It’s a major yak shave to set up all the toolchains however, so if you do trust me, you’ll find all the binaries you need in my github repo.

When the install script is done, your tablet will reboot to the draft launcher homescreen, which will look something like this: 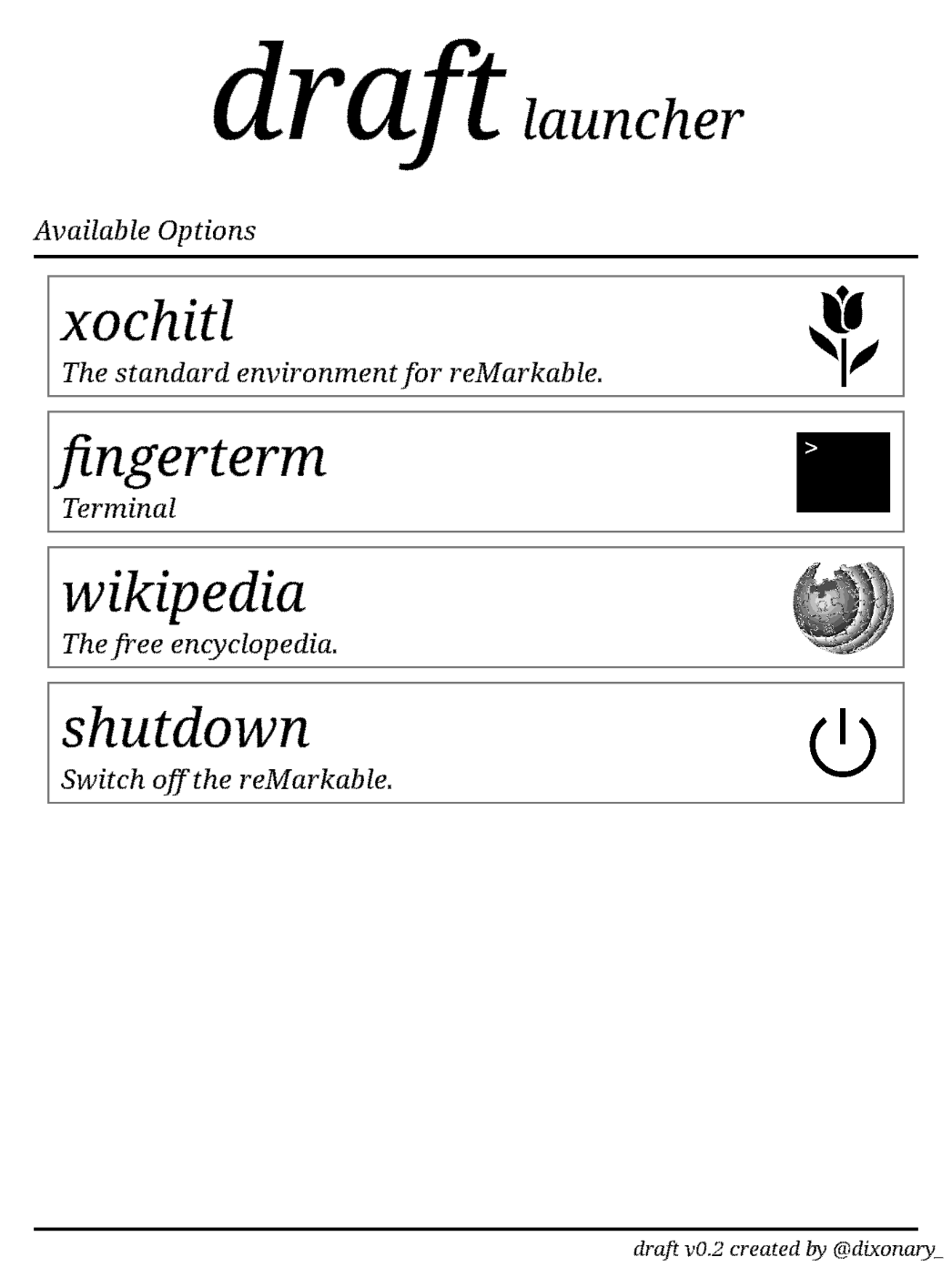 You can enter the standard reMarkable UI by tapping xochitl.

You can quit qtremarkable (or any other app launched by draft) by holding the middle hardware button for more than one second and releasing it. But you don’t want to do that - there’s so much wikipedia to read!

Tapping in the address bar at the top of the screen will bring up a keyboard so you can start looking for a specific wikipedia page. These suggestions are case-sensitive. 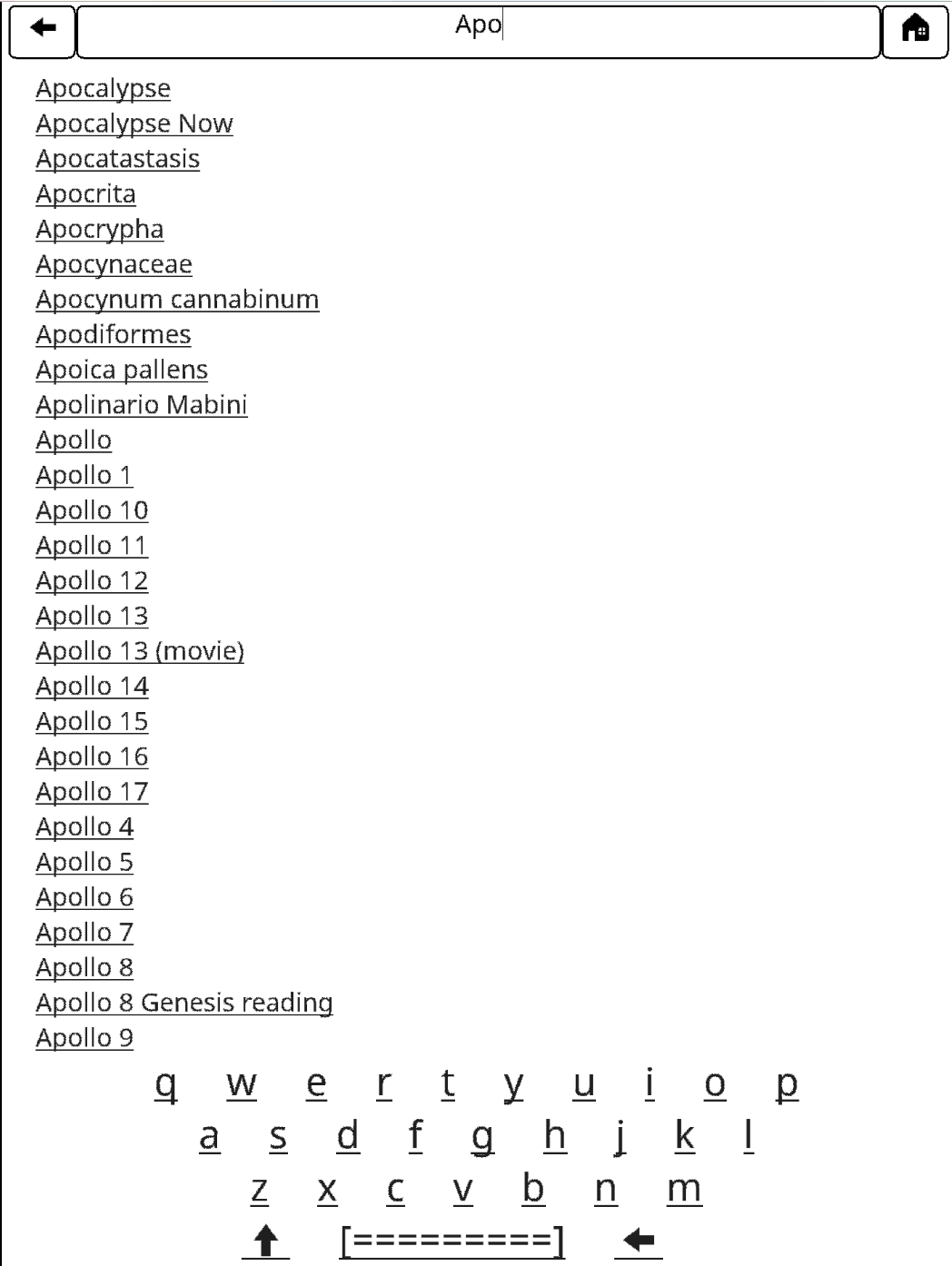 Once you have found the page you’re looking for, the right and left hardware keys scroll a full page down or up the article respectively. Tapping on links moves through articles as you’d expect and the back and home buttons at the top do too.