Things have been kindof busy lately but I’ve been on-again / off-again working on a little project to wirelessly track the temperature, light level and soil moisture of my bonsai tree, so I can track its progress and know when to water (and more importantly, when not to). 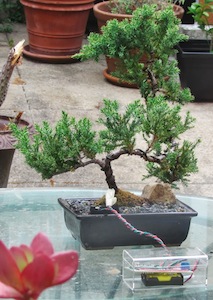 I’m using a Pololu Wixel as the brains of this device. The picture above is of the first prototype, built out on a permaproto board with a huge enclosure and a wired connection to the sensors. This prompted my previous blog post on the Wixel in general and how to get it to sleep in low power modes to maximize battery life. I also experimented with a solar panel to provide power which worked nicely in direct sunlight but would need to be augmented with a big capacitor and a harvesting set up to cope with San Francisco’s cloudy days (and nights!), so I decided to go in a different direction - to operate with low power draw and in a small package using a single AA battery, and eventually to swap out the Wixel and use a CC2511 directly on the device itself.

This past weekend I finally got time to work on the project again and managed to layout a schematic and PCB for prototype number 2, which will essentially be a Wixel shield but get power supply, board and sensors down into a single small package. I used Sketchup to visualize the 3D layout of components in the little package and to design a case which I’ll be 3D printing this week. 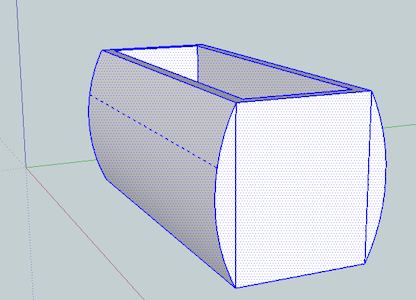 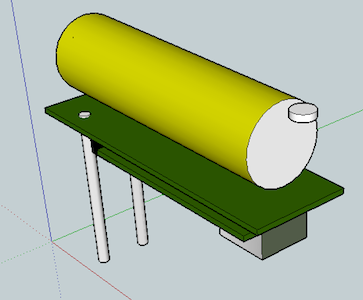 I’m experimenting with a Linear LTC3525 to step up the AA voltage to 3.3V the CC2511 requires, which will test my surface mount soldering skills. Grab the PCB design here.

Finally, I’m using another Wixel connected to a Raspberry Pi to collect the sensor data (this lives indoors) and have set up an instance of graphite to receive and retrieve the timeseries data. Here’s a sneak peek at the data coming out of prototype number 1: