I’m working on a project (more soon!) which needs to sample a few sensors and send data wirelessly at low power. After testing out an Arduino Uno + Bluetooth shield (too flaky, too bulky) and deciding that all the BLE solutions out there are not quite ready yet (though some look promising), I discovered the Pololu Wixel. I bought mine from Sparkfun at $20 each - you’ll need at least 2 since the RF protocol is proprietary.

The Wixel is a tiny dev board using the TI CC2511F32 System-on-Chip. The CC2511 supports wireless comms via a proprietary 2.4 GHz RF protocol and includes an 8051 CPU core and built-in USB. The CC2511F32 is really cheap and Pololu have done a nice job of packaging it on a 1.5 x 0.75 inch PCB which includes a USB mini connector and RF antenna. They have also created an easy to use SDK for developing apps in C and flashing the board. 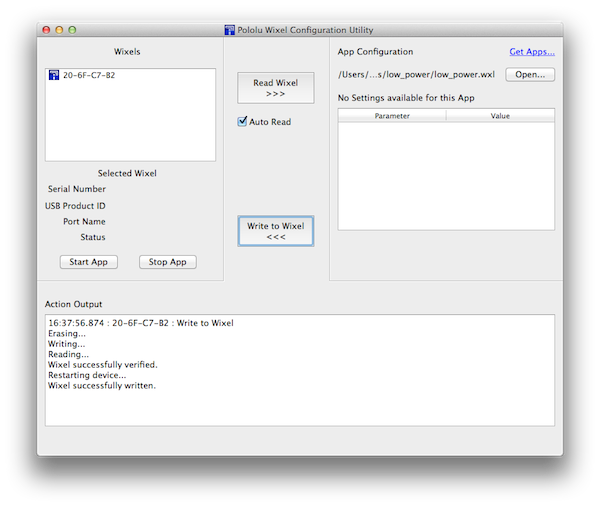 The CC2511F32 has 19 GPIO pins and an analogue-to-digital converter so I was able to use it as a complete replacement for an Arduino or similar in my remote sensing project.

The CC2511F32 draws tens of milliamps when active (the wixel more, since it contains a 3.3V regulator) but supports a few different low power modes which can turn off various parts of the SoC to achieve consumption down to 0.3 microamps. None of the official wixel examples demonstrate using the low power modes of the SoC. I did find a useful post by bogdaniel on how to use PM3, but it took quite a lot of trial and error to get PM2 (lowest power mode which can be woken from on the system sleep timer) and the sleep timer working, so I have published a low_power example on github and a little demo video on youtube.

The Wixel is pretty cool, but excitingly, TI have an updated version of the CC2511 family with BLE built in instead of proprietary RF - the CC2540. I hope Pololu, or some enterprising Kickstarters, develop a CC2540 dev board which is as easy to use as the Wixel in future.